This topic is intended to capture early testing of 21.10 (Impish Indri). Note for 21.10 planning please use this thread

If you have spare hardware (or a virtual machine or two) and don’t mind regularly reinstalling when (and I mean WHEN) 21.10 eats your installation then feel free to give your feedback here. Early testing will improve the final release

As the above page shows, probably the best way to get stuck in with testing is run Ubuntu 21.10 (either download or upgrade from 21.04 with update-manager -d ) as often as possible for usual tasks (bearing in mind that one’s productivity and data may be hampered by bugs on 21.10!) and reporting bugs with ubuntu-bug and ubuntu-bug package-name as you go.

Use this query to see if your testing issue has been highlighted by others first before reporting.

This first post will be updated with the latest important info - so you don’t need to trawl through the posts. Remember - everything listed below is subject to change/removal and should not be used as indicative with the beta & later release.

Budgie 10.5.3 is a minor release that introduces fixes for bugs, various quality-of-life improvements, and support for the GNOME 40 stack.

Budgie 10.5.3 introduces support for the GNOME 40 stack. GNOME 40 introduced various changes in Mutter, gsettings-desktop-schemas, and gnome-shell which impacted the ability to use Budgie under a GNOME 40 stack or in conjunction with GDM (GNOME’s login manager which leverages gnome-shell).

When compiled alongside GNOME Settings Daemon 40.x, Budgie will use the migrated font anti-aliasing and hinting options, which were moved from org.gnome.settings-daemon.plugins.xsettings to org.gnome.desktop.interface . In GNOME Shell and GNOME Settings Daemon 40, there were changes introduced which impacted Budgie’s ability to use dedicated screensavers, such as Solus’ fork of gnome-screensaver (which we have been using since 2017). This fork has now been formally renamed to budgie-screensaver , bumped to v4 , and promoted to a required component of Budgie Desktop, with changes introduced to facilitate Budgie’s continued ability to lock the session and attempt to co-exist in an installation environment alongside GNOME Shell and GDM. As always, we encourage that Budgie be used with lightdm and an optional greeter such as slick-greeter, as opposed to being installed alongside GDM and GNOME Shell.

Here are some quality-of-life improvements shipping in Budgie 10.5.3

Areas to look out for

Hello and welcome. Thanks for helping out!

Team member Jacob has been a busy bee.

Window Shuffler Control has been redesigned.

Also - there is now a GUI implementation of Window Rules

Window Rules enable you to place application windows to where-ever you want on the screen / monitor when they first open. 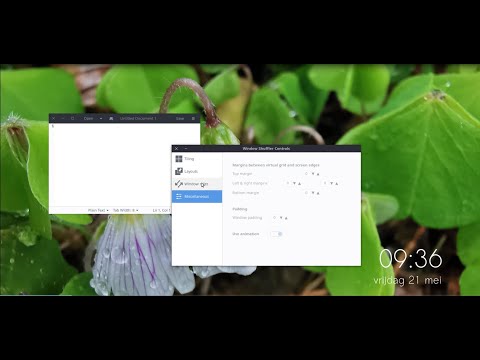 Its available through our daily PPA for 20.04 and later

Nemo Previews can now be installed via Budgie Welcome - Recommendations.

Budgie Welcome has also been uplifted to core20 - this should works as is - so normal usage testing is only required.

IRC links in Budgie Welcome now point to Libera Chat since the Ubuntu family has ended its association with Freenode.

Budgie Desktop 10.5.3 has now been uploaded into Impish Proposed.

Remember proposed is the staging repo for all sorts of things - and the GNOME 41 transition is underway - so have fun - but beware if enabling proposed and upgrading.

Yeah - definitely steer away from the proposed repo - Changes in the GNOME40 stack break budgie and related apps quite badly.

in the package gnome-desktop3 there is a custom ubuntu patch that tries to write to the draw-background key that has now been removed in gsettings-desktop-schemas 40.0-1ubuntu1 All packages that depend on the gnome-desktop3 library now crash such as...

v0.7.0 of budgie-indicator-applet has been released. This has a fix (hopefully) for any appindicator that used to display big/huge icons

Needs testing with any and all appindicators to ensure no further display regressions.

Back for yet another development cycle.

The 21.10 versions of QogirBudgie GTK theme, Pocillo GTK Theme and Pocillo icons are now available in the 21.10 repo.

So usual good observations and testing needed to ensure compatibility…

Called CPUTemp - it displays the temperature of a number of sensors.

Lookout for additional options in the applet panel budgie-desktop-settings.

Mojave-gtk-theme has now been updated - this include GNOME 40 / GTK+4 support.

This has been backported to 21.04 - and a package uploaded for impish.

Thanks to contributor Akira (AkiraMiyakoda (Akira Miyakoda) · GitHub) budgie-pixel-saver-applet has now received a number of enhancements:

Akira has enhanced the applications-menu applet

Some themes space the category list oddly. We now have a user configurable override (adjust category spacing) in the applet settings allowing you to control the spacing.

Drag and drop to unmaximize is an unvaluable addition! I’ve been suggesting it for a year already (but have no coding skills). It is now almost on par with Unite (Gnome extension) on user-friendliness.

Good news - all of the GNOME 40 stack has now migrated to the Release pocket.

This includes budgie-desktop 10.5.3. Todays daily ISO will contain all of this.

The app Drawing that is the default mini artist based app on our iso is now at the very latest version 0.8.2

Please do test so that we can catch any packaging issues that we inadvertently made.

Alpha 1 of our 21.10 raspberry Pi version of Ubuntu Budgie is now available for testing.

So this has the very latest budgie arm tweak tool as described in the first post.

Currently snaps such as budgie-welcome do not work.

Do give this image a try - early testing allows us to resolves things before the final release.

The UB teams 21.10 wallpapers have dropped onto the latest ISO

A post was merged into an existing topic: Plans for 21.10