I’m looking for an applet as close to this one as possible (this is from a screenshot posted on WhiteSur theme) – basically a way to display all the info in one applet instead of having one for each. 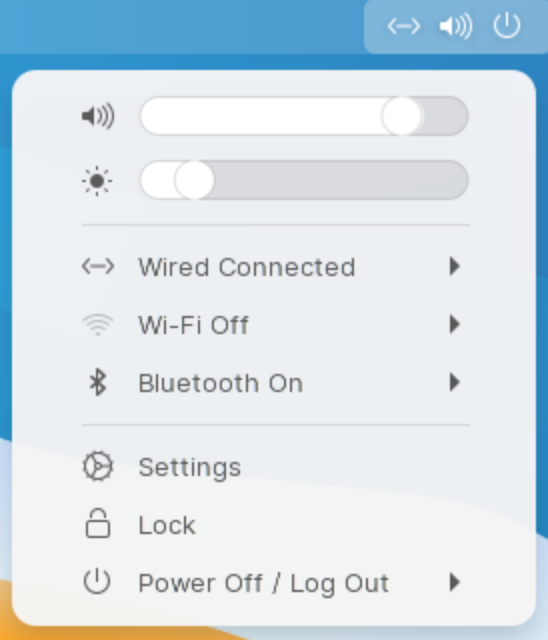 I don’t particularly like the Budgie status indicator as the spacing can’t be adjusted and the bluetooth icon can’t be removed (unless I missed something?).

Thank you in advance

There are no third-party applets that provide that info in that format.

Personally (I don’t know if upstream would support such an idea) - I would have a tick-box in budgie-desktop-settings that when ticked would collapse the two/three icons under one and display the info for those three icons in one popup.

Might be an interesting project for someone - but first touch-base with upstream to see if they would support such a capability.

Who would be “upstream” in this case? Who should I get in touch with?

So upstream here is Solus - GitHub - solus-project/budgie-desktop: I Tawt I Taw A Purdy Desktop

Alright, cheers, I’ll make a post on their forum then with the suggestion.
In the meanwhile though, how do you think they managed to obtain that result on the WhiteSur theme page?

Thats a picture of GNOME Shell

Alright I’ll look into that as well. Thanks for the help!

Where do you have a bluetooth indicator in Budgie ?

Maybe look at this, to be sure your bluetooth is off at start ?
The idea is to create a launcher in ~/.config/autostart that sets bluetooth off using command rfkill block bluetooth
This won’t prevent you from starting bluetooth when really needed.

The bluetooth indicator is part of the Status Indicator applet:

I had already set bluetooth to be off by default with the option to turn it on when needed but the icon remains there. Not a huge issue though, more of a design thing.

I was referred to this, so I guess we just need to wait

#### Part 1. Break up the integrated status indicator Breaking up the status in…dicator into individual applets makes things even more modular so the order and placement of the icons can be varied; the integrated applet becomes: - battery/power indicator - volume indicator - bluetooth indicator - session applet* Clicking on any of them would open Raven in "Applets" view since that is where the relevant information is. _*would behave like the power button in the Raven "powerstrip"; displays the session/shutdown dialog._ #### Part 2. Create Raven Applet Since the break-up status applet removes the original Raven trigger point it will need a new trigger point. Creating an applet to trigger Raven also solves raven's discoverability problem since it would have an icon in the panel. This new applet should be fixed to the right hand side of the panel and be always present so the user doesn't become unable to open Raven if they remove it.