We’ve developed an applet that allows you to have Hot corners function that you used while running OS X. Want to use Expose? Open specific app? No problem, just put the mouse in the corner.

Reading this was one of the things that drew me to try Budgie.
I would love HotCorners with something resembling macOS functionality.

What is Window Previews**? How is someone coming to Budgie for the first time supposed to know this?

Besides, that I don’t see anything in the dropdown menu options that I want to assign to my Hot Corners. I don’t want to lock my computer or have apps in corners.

On macOS one option is that we get an overview of all applications and workspaces. We can switch to a different workspace or/and drag and drop an application into another workspace.

Is that possible in Ubuntu Budgie?

Each and every DE has its own habbits and conventions in the way it is used. When switching to another DE, no matter which, you’ll have to get used to its logic. 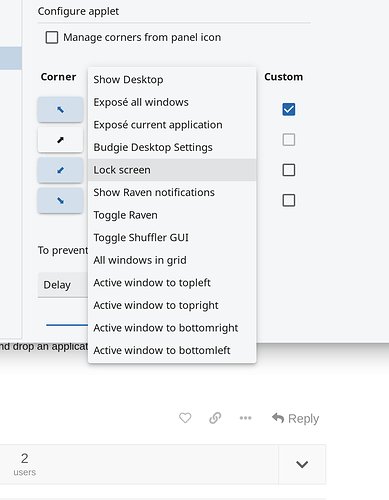 Tick “custom” and add your own command.

Window Previews Is our expose-like functionality. To activate: Main menu → Previews → tick Run Previews, at your choice, show windows from all workspaces or the current one. Drag from one workspace to another? Not yet in this one, maybe in future.Workspace Switcher, another applet available in the applet list, which does hav the drag-to-workspace functionality. Again choose Add applet to use it.

Each and every DE has its own habbits and conventions in the way it is used. When switching to another DE, no matter which, you’ll have to get used to its logic.

I actually had got as far as adding the HotCorners applet. Sorry, if that wasn’t clear. In fact, I also took a screenshot but forgot as I wasn’t able to post it in real-time yesterday because I had reached my ,maximum limit of posts for that day.

I wasn’t happy with the options in the drop down and couldn’t get HotCorners to behave as I would like it to. I don’t need HotCorners for instance to Lock screen or launch Budgie Desktop Settings.

How do we add our own commands?

Thank you for pointing me to Windows Previews

This is not directed at you, of course, but it would be helpful if there were tutorials and how-to’s
I still don’t know what a Raven is, lol
As you said every DE or Window manager has its way of doing things.

Tbh, I don’t feel very at home in Budgie. It reminds me of e17. Too many menus and a bit clunky. Also, really Snapd the more I hear about it.

Unfortunately, I am unable to log into Start Manager so, I’m trying to make the best of it.

Thanks, for helping out though

Ah, yeah, I can imagine not all the jargon is clear to new users. Raven is the side section that will appear if you click on the [<] button in the top right of the panel:

To set your own command on a hotcorner, click the corner button on the left to activate the corner, subsequently tick the box on the right, saying “Custom”. The entry will clear, and you van enter any working command you like. 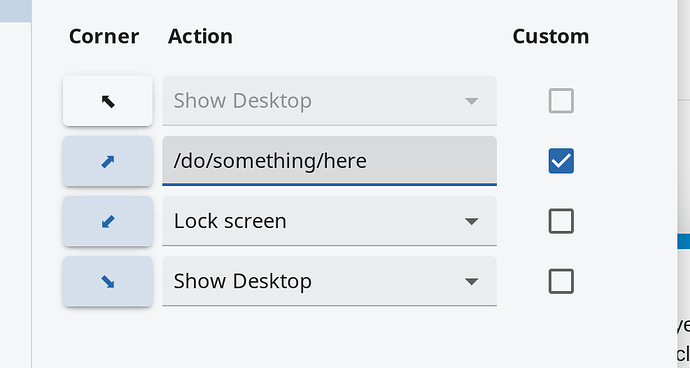 Sorry, I don’t get it

What is a ‘working command’ that’s the key here. Is there any documentation on this?

Yeah, if you’re not familiar with command line, that is a bit of a problem. There is a lot of documentation on the internet on linux commands, too many to mention. I suggest looking around on google if you’re really interested. Could be as simple as “gedit” to open gedit.
If you have specific requests though about the dropdown list, the advantage of a distro like ours is… You can always ask to include it in the list. If we agree it is useful, good chance it’ll get included in the next cycle.

The good thing about the custom actions is it allows you to extend the functionality beyond the built-in options. You mentioned switching to a different workspace. It is not perfect, but you could get HotCorners to do this via a custom action.

For example, if you were using two workspaces, you could, lets say, define the bottom left corner with this custom action command to make it switch to the first workspace:

Then set up the bottom right corner with this custom action command to switch to the second workspace:

Now you have the ability to switch desktops by moving the mouse to a HotCorner.