Love Ubuntu Budgie and truly appreciate all the hard work that has gone into creating and maintaining it! However, with this new dist-upgrade to 22.04 (I think) all of the sudden much of the background in individual windows, as well as almost all buttons and check boxes have turned a mauve color. I cannot seem to change this no matter what I try. At first I thought it was only in Firefox but now I realize, after trying out various supplied Themes, that it seems to be a system wide problem and no matter which Theme I try the pink remains. I assume it is a Theme related issue given that the themes control the color schemes of the Desktop and Windows?

Is anyone else having this issue or know how to remedy it? It is driving me bananas! I will try to upload some screenshots in the next few minutes. Thanks in advance for any help!

The reply button? That is blue here on your screenshot.

Is this a laptop? Monitor?

Are you using nvidia graphics? If so have you got the proprietary driver installed.

Maybe your monitor profile needs to be tweaked

The reply button? That is blue here on your screenshot.

Yes but the “share,” “bookmark,” and the “watching” drop down menu button are all in Pink. Do you not see them as such? Heck even the quoted text, now that I have quoted you, is highlighted in Pink. I would have uploaded (tried to) more screenshots but was told that new users could 0only upload a single image per post I believe.

Is this a laptop? Monitor?

Are you using nvidia graphics?

Maybe your monitor profile needs to be tweaked

I have tried tweaking the Sony color settings to no avail.

Here is another screenshot: 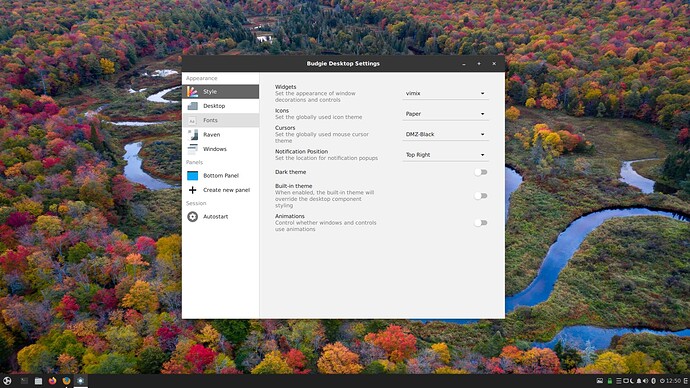 Do you have another monitor to test against?

Can you change from hdmi to a vga cable … i.e. a different connection type.

The profile i am referring to is in budgie control center … not the physical monitor settings.

The profile i am referring to is in budgie control center … not the physical monitor settings.

Ok let me give that a try.

That’s it! Really interesting. Deleting the monitor profile in Budgie Control Center → Color fixed the issue. Now, it still lists the “Sony TV Monitor” but lists it as “not calibrated” and after a restart everything was fine. I then re-added the “Default: Sony Monitor” and everything went pink again. So I deleted the profile again, rebooted and back to no Pink. Thanks for your help! It was driving me nuts.

I also see that you never saw the pink, yes?..lol. The background and buttons in the screenshots themselves now appear gray where I was seeing pink! So the screenshots were not displaying what I was seeing. I wouldn’t have blamed you for thinking I was nuts:)

The system won’t calibrate (whatever that means exactly) the monitor again on its own will it?

Again thanks so much for the help. Truly appreciate it.