I know gimp can be problematic on the latest of any distro - but how do I give the proper permission to show the menu in the global menu bar at the top? It appears that installing it from the repos does not work - due to the removal of Python2 pretty much. I also risk messing up apt if I install old packages.

I decided to try the snaps, appimage and flatpak - but flatpak was the only one that allowed plugins to work correctly due to python2. Flatpak does not allow the apps menu to appear in the global menu. Can anyone help?

This is the error I get when running it via the CLI.

Gimp worked with the global menu in prior versions as I remember.I believe that applet comes from Solus upstream and would have to be fixed on that end or or modified. Solus OS does not use apt so I would not expect the developers to address the problem. I am also using the flatpak so I can keep the global menu installed because I like it.

I believe that applet comes from Solus upstream

Do you know why it worked with Ginp before and not now ?

due to the removal of Python2 pretty much.

The removal of Python 2 ( from distribution ) has nothing to do with global menu.
That will impact Gimp’ plugins/add-ons that used to rely on python 2 though.

Here the problem is with those so called universal packages which do not bundle in their guts the needed appmenu-gtk-module. And as trend goes, global menu is not a hot topic amongst people praising CSD…

Anyway, even if your system provides an appmenu-gtk-module, flatpak and snap won’t use it as it’s outside of reach of their confinement / sandboxing. And a bit the same for AppImage which will only use what’s inside its packaged contents.

Canonical used to « patch » many packages in order to ensure global menu everywhere but since the move back to gnome-like environment, they dropped those patches ( less work for a reduced team dedicated to desktop ).

Did you try with Gimp as provided by Panda Jim / UbuntuHandbook ppa ?
If you don’t need older plugins/add-ons in Gimp, it’s worth trying ( it will get you back online help and .xcf thumbnails, compared to snap ).

If you need older Python 2 plugins/add-ons then you’ll have to chose : NO global menu BUT plugins OK with Gimp as an AppImage that still bundles Python 2 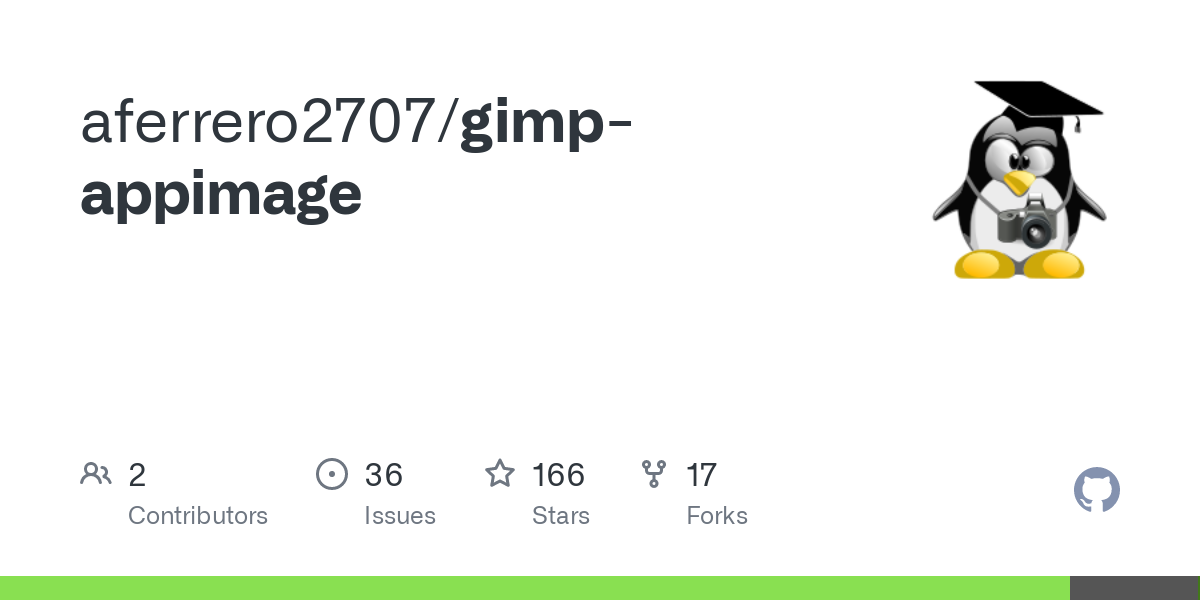 Contribute to aferrero2707/gimp-appimage development by creating an account on GitHub.

The removal of Python 2 ( from distribution ) has nothing to do with global menu.

I did not mean to imply that what is in the repos did not work global menu wise - it does, but I was more interested in making either the snap or flatpak version work, particularly the flatpak version because it fully works. I would actually use the Python scripting, 2 or 3, if it worked and some existing extensions as needed.

If you have a solution for making the global menu and the Plugins that requires Python2 to work then I am all ears.

Ha, ha… from what I’ve tried, it will be one or the other option, not both.
AppImage if you need python 2 ( for how long left ? ).
Gimp from PPA if you need global menu.

In my memory Gimp snap was ok with global menu though many other drawbacks made me drop it. Gimp is not officially provided as a snap.

From what you say, Gimp flatpak has python 2 support, you should probably follow that one as I think Gimp dev’s provide it through that channel.

Maybe there are other solutions but I did not find them - I also dropped global-menu from all my Budgie setups and only kept pixel-saver ( I have a top panel ). At least menus always sit at their expected place, and don’t misread : I used to much love global menu but it’s becoming inconsistent.

It’s just my « empiric » thought as I daily use Gimp at work.

It is becoming inconsistent but entirely due to Gnome for the most part. I hope devs keep it alive and ignore the direction Gnome is trying to force. I really dislike that the Firefox devs striped it out. I have a patch for that though… but it is a hassle to have to apply to every update as I have to recompile each time.