got a low end comp i run the 18.4.5 lts on.
how much more in resources does the newer version use?

it actually is a great surfing/utube viewing comp.
just wondering how the new version is, and will it run on this comp after upgrade?

I can’t provide a comparison as I’ve not used Budgie 18 (or 19 for that matter). Probably the best way to find out is to run your system from a live media. Download the 20.04 live image, write it to a USB drive and then boot from it. Test all the software you expect to be using. You may have to go through multiple boot cycles in order to test everything you’re interested in as you likely won’t be able to install it all in a single session… I’ve been running on a low-power (Intel J1900) board with good results. The issue for me hasn’t so much been CPU speed but rather memory. I originally had 4GB of memory which at times was a challenge to keep from being completely used up. I had to run the system monitor continuously in order to monitor how much was being used and make sure I wasn’t running too many apps. Granted, the CPU cores could become maxed out too at times but I mostly solved that issue by installing a browser extension to block ads. Good luck!

the onboard graphics reserves the .2 gb, i think it’s in the bios.
otherwise, it’s about the top it will handle.
5000+ is max processor, so not a lot to gain there.
pretty choppy without the graphics board.
just about top end this sysyem will run.
it does have a 500GB ssd though.

i should note, grub had t be set to “noapic”, to boot.
i hope this wouldn’t change at the the time.
see, linux is not what i’m used to.
i’m not a command line person. point and click.
although i do get along well with instruction.

The hardware requirements of UB hasn’t changed between the two LTS’s.

You should hopefully noticed the improvements that the new kernel and graphics bring together with the more efficient software compilation in 20.04.

As always if your hardware is capable then an increase of 4GB ram to 8GB will allow you to more flexibility on the number of windows and applications you can simultaneously open.

Memory is very cheap now a days, if you can upgrade the RAM of your laptop that would be an awesome thing, No ?

For what it’s worth, when my laptop went belly up around the beginning of February, I was forced into co-opting the J1900 motherboard that I had previously bought and reserved for making a shop computer, as my primary desktop machine (see link below). To keep costs down, I found a wooden decorative box on Amazon to use as a case.

So, depending on if you already have a case, monitor, keyboard, mouse, hard drive and power supply, it might be a better option to build a new system (or replace the motherboard in your current one). You could conceivably get by with spending about $110.00 total for a 4GB system. Just a thought. And yes, as you can see from the uploaded photo, my hard drive is actually mounted using a couple of rubber bands, lol.

I forgot to mention that there’s also a DC jack powered version of this motherboard but at this point in time it’s likely very difficult to find one for purchase (these mini ITX boards were highly prized for their low power consumption and the ones with a DC jack were especially in demand). I effectively converted mine to DC powered using one of those little “pico” power modules that sell for about $15.

In the recent series on ARM single board computers I have covered the BeagleBone Black, MaRS, TI’s OMAP5432 Board, the Radxa, a few of the ODroid ARM machines, and many more. On the Intel desktop side I’ve covered...

it’s an old hd5750 radeon card.
i took it from my other desktop with a phenom2x6 1100t black processor tha started having glitches.
since this one works, i just kept adding until now.

processor was $7 cdn. shipped.
$30 for a couple 1gb sticks of pc2.
but i’ve got til april i think til 18.04lts runs out.
maybe wait til the new year when more installations have cleared without bricking.
or maybe i’ll look into gettig my 10yr old 6 core going again.
i still have the 1070 6 core too.
or find a $200 internet cafe extra with no OS.

at least my processor is faster than the old pentium 4 of the day.
thanks for everyones input.
think i’ll stay comfortable for a few more months before i try it.
18.04 did install quite nice and gave me the choice of the no apic option and added it to grub at install.
that was nice to a guy like me.
definately more fool proof to install.

You are my heroes. These are stories of the dodgiest sounding computers ever. 16 yr old desktop beats my 2007 iMac, but only by a few years. I especially like the wooden box with the elastic band mounted HDD.

I’m surprised you haven’t mounted it properly in the wooden case? 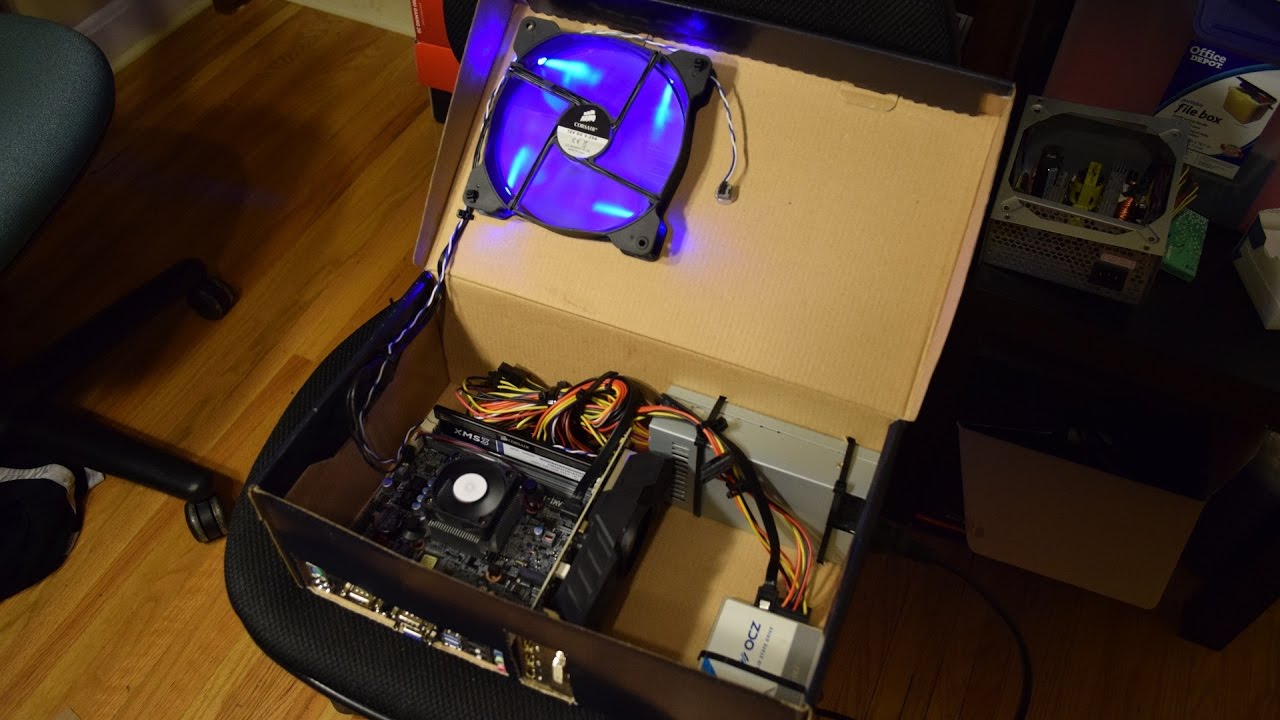 That’s hacking it to the next level my friend! Nice job! Next time I need to bench test a board, that’s what I’m gonna do. It would make it much easier to move around and it also provides some protection from pets, mother in-laws, etc… As for use of rubber bands in my build, yeah, I probably need to do something about that to at least make it more presentable (though, with the huge cable snarl, it’ll never be 100%). When I build something like this, it usually takes me a while to get everything the way I want (and the Covid-19 thing hasn’t helped). I still have to mount the power jack to the back side of the case. Right now, I have the two power wires just sticking out of the hole, terminating in a “temporary” jack connector that the laptop power “brick” attaches to.

still original case it came in.
hp a1630n.
that’s the base.
wasn’t working too well.
then i thought, i’ve got a graphics card to try.
and there it is.
1080 desktop.
stumbles on real busy sites.
runs 720 on utube.
i run ad/popup blockers.
once i hibernate for winter, maybe i’ll get back to getting the 10 year old one working.
with the 6 core and an asus eah5830 card to add to it.
(looked it up. appears 2006. only 14yrs. i guess.
thought it was older)

My experience of upgrading from 18.04 to 20.04 was smooth & simple. The laptop runs (subjectively) a bit faster too. The laptop is a Dell Inspiron 11z with 4GB RAM - so a good few years old.

However I have a much older 4GB Dell laptop that Ubuntu/Budgie struggled on (and is 32bit). I have put Bodhi Linux (https://www.bodhilinux.com/) on it - and it absolutely flies! Also I love Bodhi’s design.

because i’m not a native typer, i try and get the info in with few extra words.

or maybe i’m ADD or something.

No no no, it’s awesome! There’s this constable in Toronto who tweets alerts from the PD, and it’s a similar rhythm:

neat link.
so when i update, should probably make an image on a boot stick in case of failure first then?
then start the auto upgrade i suppose would be the most fail proof.
guess i should also keep the boot stick for 18.04 since it does run.
just in case.
maybe wait til new year to let others catch a few more bugs yet.
you just hate to chance a failure when it runs so nice now.
thanks for everyones input.
i feel confident in it when i’m ready for it.

This is a cool setup of sorts. I guess I could never come up with the idea of mounting a computer inside a shoe-box

It only needs a remote to pop up a VR-screen